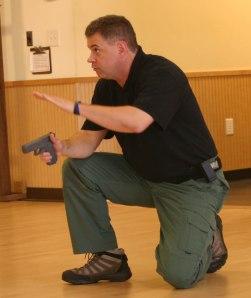 Steven Mosley has over 34 years of law enforcement work experience.  He currently serves as the Director of Training for the Combat Hard Training Group and continues to actively work for the federal government in a Supervisory Law Enforcement capacity.

He has been involved in firearms and defensive tactics instruction for over three decades.  Steven is a graduate of some the top shooting schools in the United States: Thunder Ranch, Heckler & Koch, Smith & Wesson, Offshoots, Rogers Shooting School, Glock, FLETC, FBI and NRA.

Within the fitness arena, Steven’s accomplishments include USA Weightlifting Club Coach and a Physical Fitness Coordinator for the federal government.  He is also a certified Advanced Boxing Fitness Trainer, an International Kettlebell and Fitness Federation (IKFF) Certified Kettlebell Trainer, and an American Kettlebell Lifting Coach.  Steven is certified through the Battling Ropes Training System as a coach and is also a certified Warrior Diet/CFT Level Two Instructor.

Steven holds a Bachelor of Science degree in Criminal Justice from Brenau University in Gainesville, Georgia. 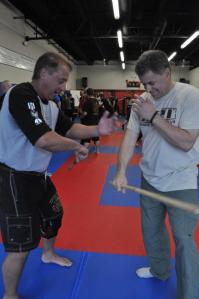 DON GARON
Don is currently employed as a hand to hand combat and firearms instructor by one of our nation’s largest counter-terrorism agencies. He has over 25 years experience teaching law enforcement and military personnel. He has personally instructed over 9,000 civilians and 3,000 law enforcement and military personnel. He has produced over 100 Black Belts in his teaching career.  Beginning his training at age 14, he has over 45 years of martial arts experience. He is a Full Instructor in the Filipino Martial Arts & Jun Fan Gung Fu / Jeet Kune Do under Dan Inosanto.
He is a Full Instructor in Muay Thai under Surachai Sirisute. He is a certified instructor in Lameco Eskrima under Edgar Sulite and Inayan Siniwali, Inayan Desquerdas, and Inayan Largo Mano under Mike Inay. Don also holds Black Belts in Okinawan Kenpo, Chinese Kenpo, and Koseido Karate.

Don’s law enforcement specialty is edged weapon defense. He has contributed to such notable entities as Law & Order Magazine, the Street Survival Seminar series, and appeared in Surviving Edged Weapons with Dan Inosanto and Leo Gaje.

Before moving to Atlanta to focus on his work for the government, Don owned and operated martial arts schools in Pittsburgh, PA. At one point, he owned two schools and had oversight on four franchises he sold to several school owners there.

Don was a founding Board Member for the Thai Boxing Association of the USA, and before moving to Atlanta was the Northeast Director. He now serves as Special Adviser to the Association.